Sunday was a relatively lazy day. I had a light breakfast and read for a while, before wandering down to the Second Avenue Deli for the Flyertalk Deli Do. Most of us were there well before the deli opened, as we wanted to be sure they could seat our group, which turned out to be about a dozen people, only a few of whom I had met before. Interestingly, I ended up sitting next to somebody who works for the company I worked for, though she is in Los Angeles. Anyway, I ate a tongue sandwich, some good vinegary cole slow, and a couple of sour pickles. Plus diet Dr. Brown’s cream soda. It was delicious, but pricy. I think the most popular order was the matzo ball soup and half corned-beef sandwich, by the way. Anyway, the food and service were both excellent, as was the conversation.


Afterwards, I had some free time, which I spent meandering around midtown Manhattan. The highlight of that involved looking at some murals outside the Fashion Institute of Technology. Here are just a couple of them: 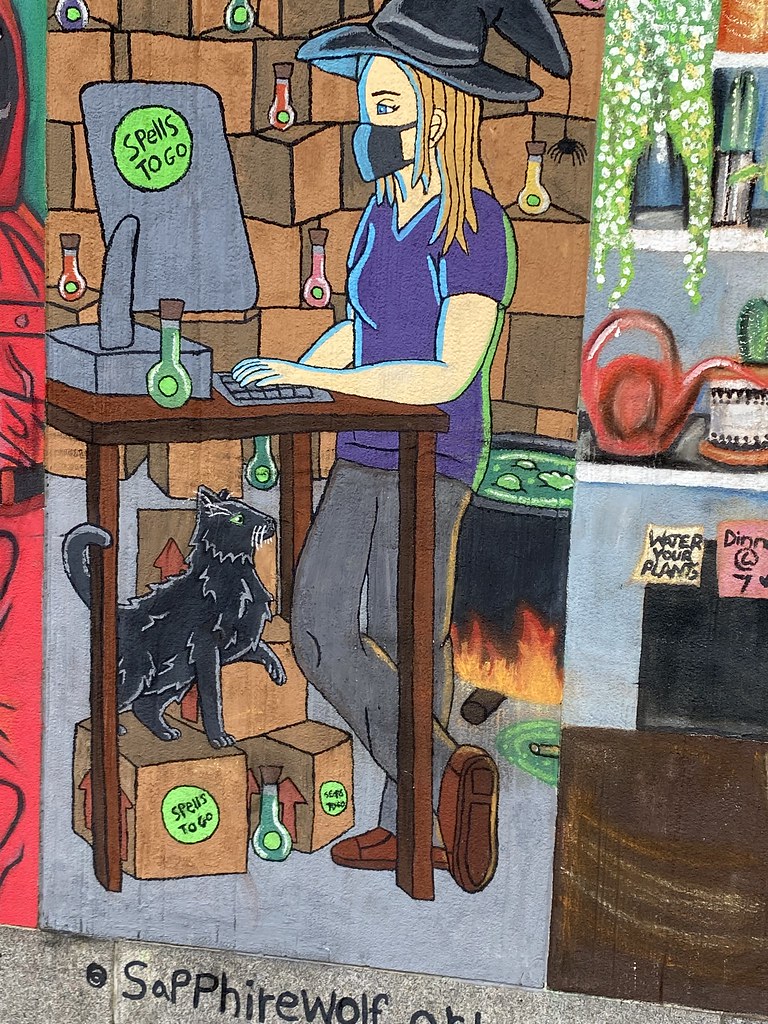 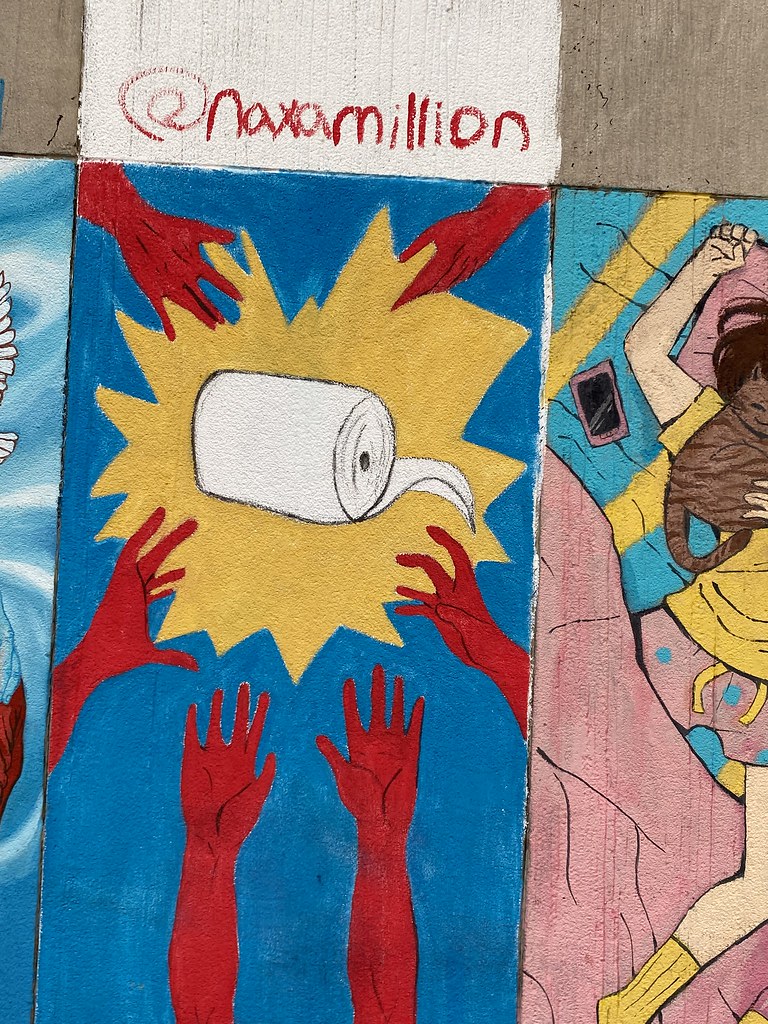 Eventually, I made my way over to Asylum, where I had a ticket to see Seth’s Broadway Breakdown. I was expecting a sort of cabaret show, but Seth Rudetsky really did mostly a lecture, with musical snippets, intended to give people a better appreciation of Broadway music. He talked about things like chest voice vs. head voice, vibrato, riffing, pure vowels, etc. He also provided several bad examples, notably an arrangement of the Osmond Brothers singing a medley of songs from Fiddler on the Roof. It’s very funny, as well as educational, though it left me longing for more (and, in particular, complete songs. Well, not from the Osmond Brothers.) There was also, apparently, an opportunity to pay extra to meet Seth, which was an option I had missed when buying my ticket. I’m not sure I would have done it anyway, however.


Monday’s big venture was to the Whitney Museum of American Art, primarily for the Jasper Johns retrospective. I took advantage of the location to have breakfast at Hector’s, which is a classic New York diner, still full of guys who work in the last remnants of the meatpacking district, where I had some very filling pancakes. Then I walked over to the Whitney where there was a short wait in line to get my vaccination certificate checked and my ticket for the museum (bought in advance) scanned. Then I took an elevator up to the 5th floor for the exhibit.

The main thing is that Jasper Johns has had a long and prolific career. The exhibit included his most recent major painting, Slice, completed in 2020, which juxtaposes the universe with an interior view of the human body that was drawn by a high school student. 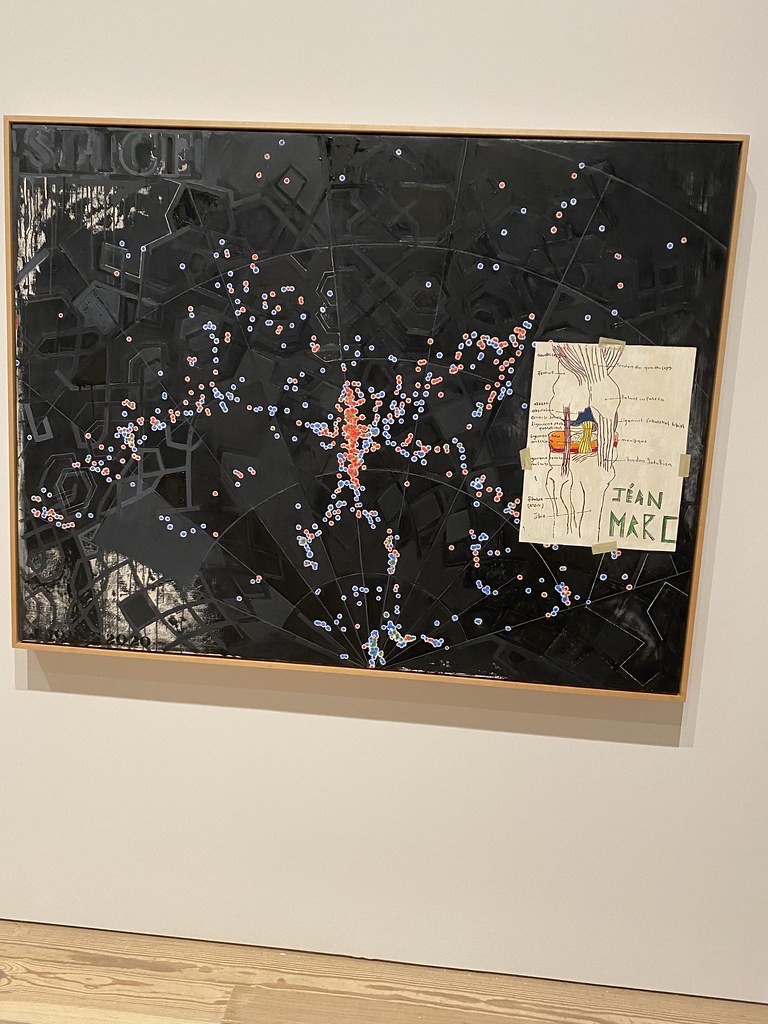 Some of the more familiar works are the sculptures of numbers and the paintings of flags. I also like the painting that looks like a bunch of blobs of color, but becomes a map of the U.S. when you look at it more carefully. 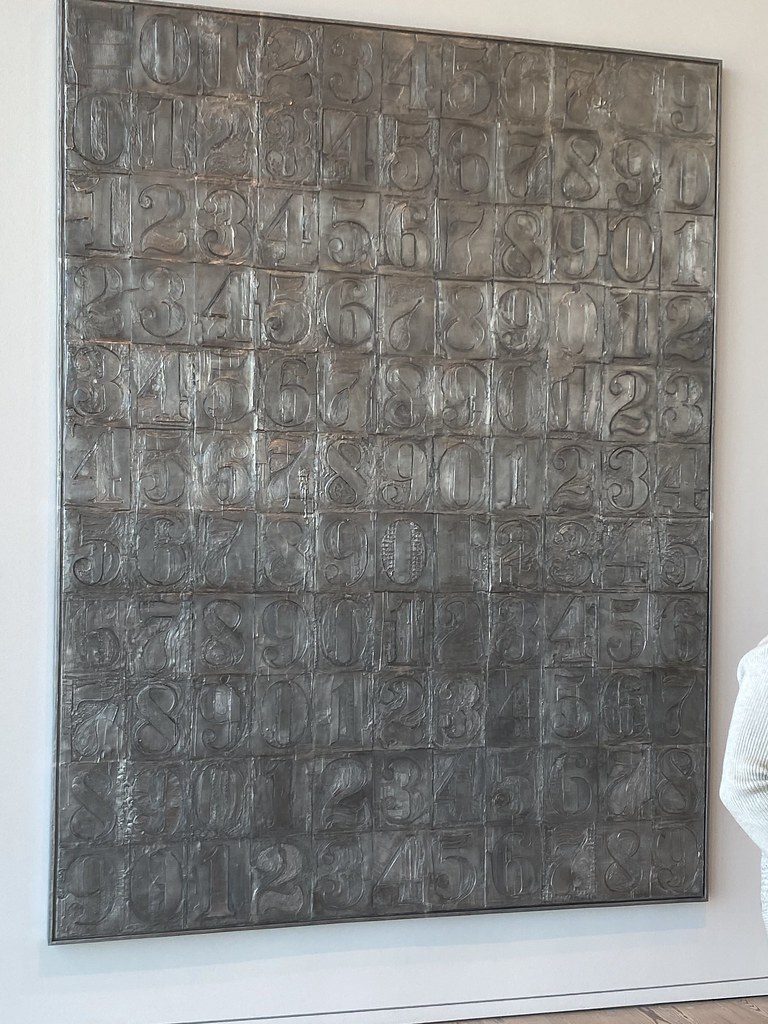 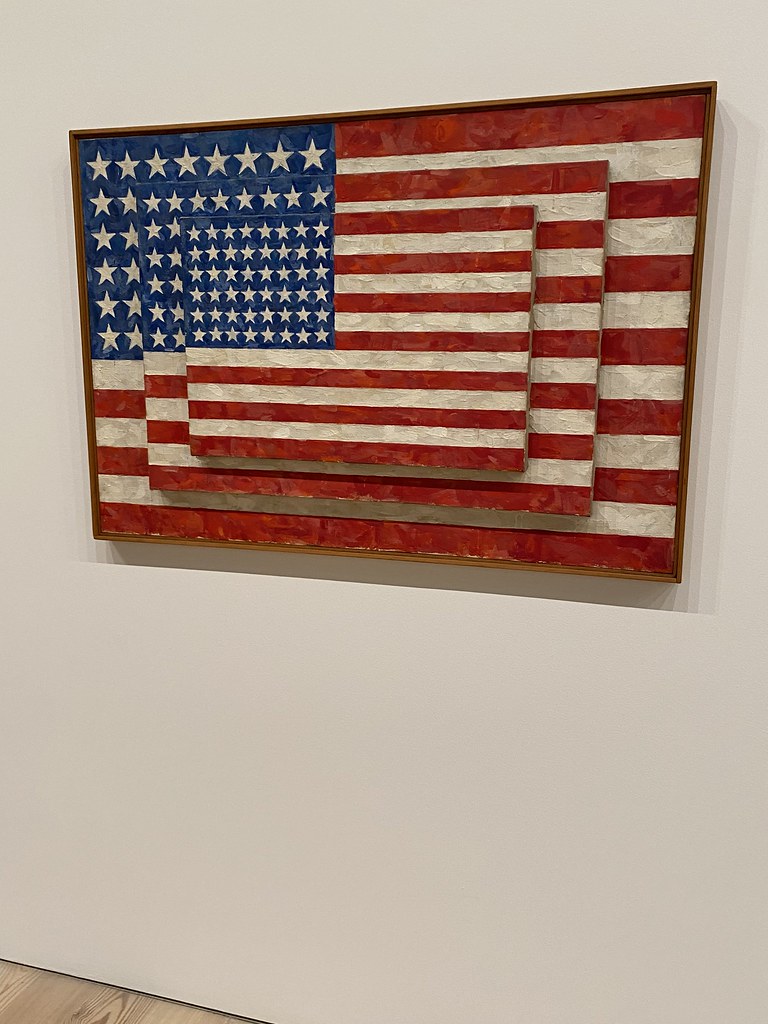 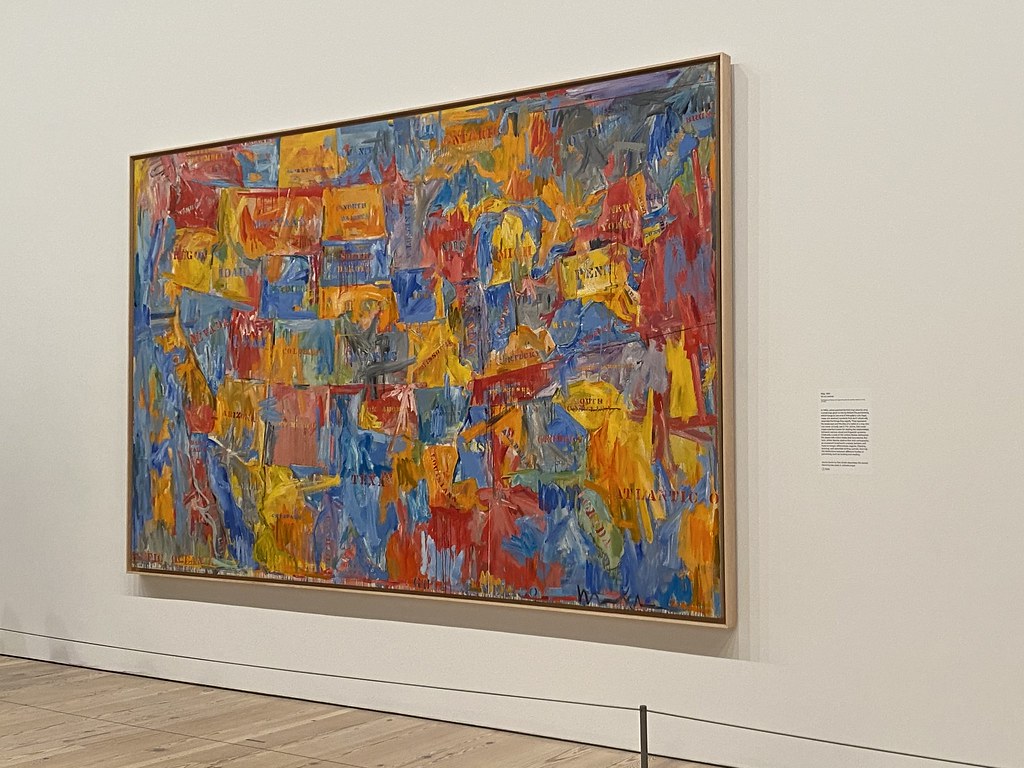 There’s a huge amount to see. I particularly appreciated seeing several different versions of the same image, which helped me appreciate how much of a perfectionist Johns is. Overall, I spent about two and a half hours looking at the exhibit. I definitely need to find time to get to Philadelphia and see the other half of this retrospective (which is at the Philadelphia Museum of Art).


There are plenty of other things to see at the Whitney, too. For example, they have lots of work by Edward Hopper, including notebook pages of his sketches, with descriptions written by his wife. 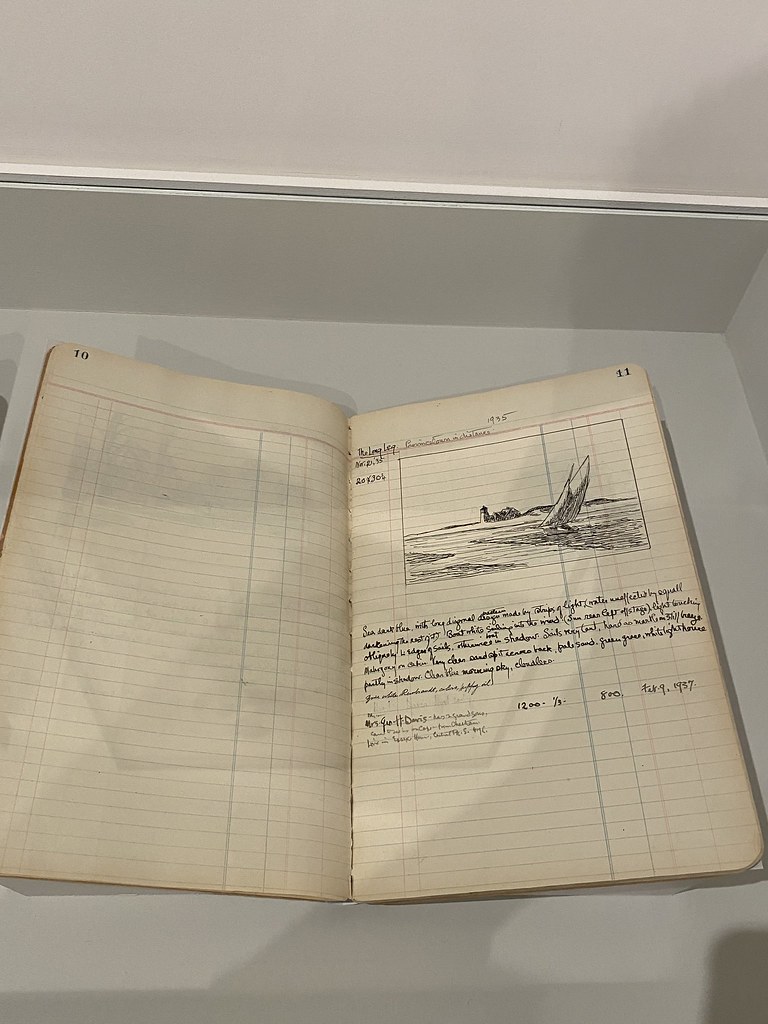 One of my favorite pieces is in the Crafts section on the 6th floor and is called More Love Hours Than Can Ever Be Repaid. This work, by Mike Kelley, was made out of handmade afghans and stuffed animals he found at thrift shops. I had first seen it at an exhibit at the Los Angeles County Museum of Art many years ago and it has stuck in my head ever since, so it was delightful to see it again. (It is paired with another piece by Kelley titled The Wages of Sin, which is made out of drippings of candle wax.) 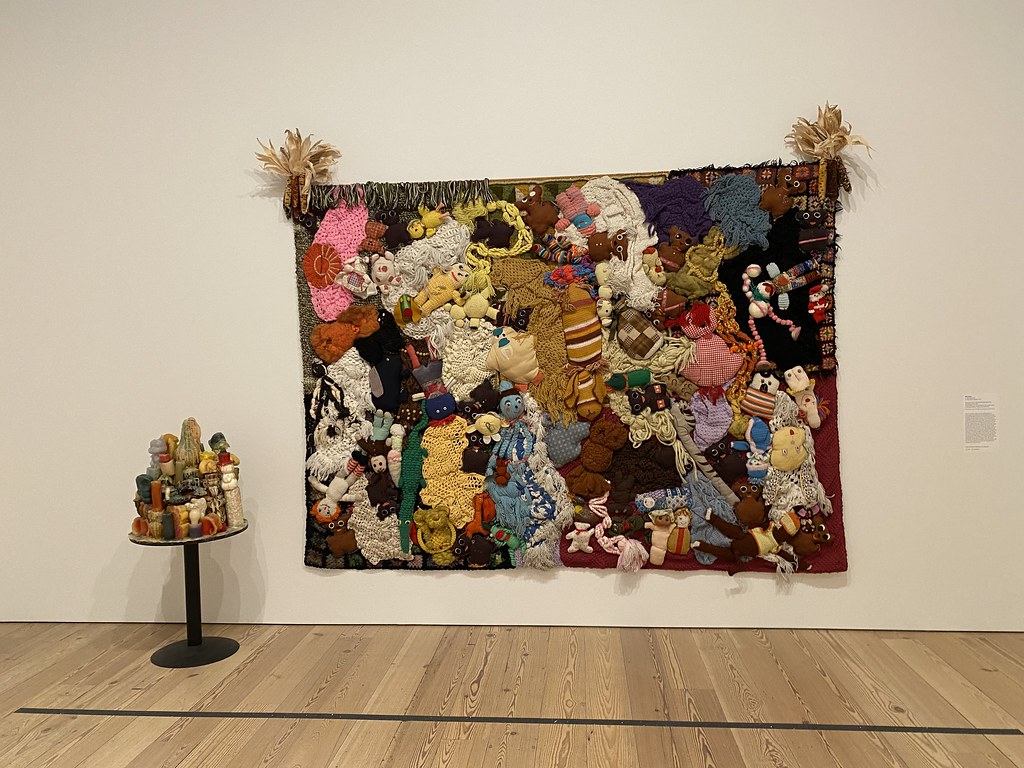 Overall, I spent the better part of the day (including a stop for tea). I headed back uptown to rest for about an hour before having dinner and making my final theatre excursion of the trip. This was the most expensive ticket of the trip, since Six is the hot ticket on Broadway right now. For those who haven’t heard about it, the premise is that the six wives of Henry VIII are competing to see which one was treated the worst by him and should, therefore, be the headliner of their girl group concert. This started as a student show at Cambridge and moved on to the Edinburgh Fringe. In my opinion, it belongs more in a fringe than on Broadway. The music was overamplified and mostly standard pop fare.There were some funny lines, particularly in the form of the snarkier efforts of Anne Boleyn. But, despite the early claim, one is unlikely to learn anything new about the wives. And the costumes are absolutely hideous. On the plus side, it’s only 80 minutes long.


I had an earlyish train back to D.C. in the morning, but did have time for another diner breakfast (at Andrew’s Coffee Shop, at 7th Avenue and 35th Street), which is a place where I often ate with my mother. In theory, I could make an omelette and toast at hime, but I am far too lazy to do so, which adds to the enjoyment of eating in diners. Anyway, it was a pleasant enough Acela ride back,


One the thing I should note is that almost everywhere I went in NYC asked to see my proof of vaccination and mask compliance there was much higher than it was in Mystic (or in the D.C. area, alas). Overall, it was a nice week away. I am probably going to go up to New York again in January because of a couple of things I want to do.

This entry was originally posted at https://fauxklore.dreamwidth.org/499108.html. Please comment there using OpenID.
Collapse