With another day in Mystic, I would have gone back to the Mystic Seaport Museum and visited the (free) art museum downtown. But I had booked myself pretty heavily for the New York part of my trip, so Friday morning saw me back on an Amtrak Northeast Regional train. We arrived on time and it was a short walk from the Moynihan Train Hall to Hudson Yards, where I was meeting a friend at Mercado Little Spain. I should note that while the walk was short, it was somewhat pedestrian hostile, due to extensive construction. At any rate, I arrived first and managed to find a table in the food hall. I didn’t have a long wait and we had a lovely conversation about theatre and travel and the difficulty of meeting people during the pandemic (she had moved from the D.C. area to NY to write for the theatre not long before things shut down). After about an hour and a half, we left and I walked down to my hotel. I stayed at the Hyatt - Herald Square, which is in a convenient location. (They also have very comfortable beds and reasonably good sound proofing. I still prefer the Library Hotel, but hadn’t planned far enough in advance to get a good price there.)

I had enough time to unpack and organize a bit, before heading to the Upper West Side to have coffee with another friend (someone I know from the puzzle world). The conversation included literature, puzzles, Jewish genealogy, and the significance of the corner of 72nd Street and Broadway in my teenage years. (The short version is that was the location of the lishka, the headquarters of Dror, the socialist Zionist group that ran the summer camp I went to for a couple of summers. I spent some Saturday afternoons handing out pamphlets on that street corner.)

Back in midtown, my evening entertainment was seeing the first preview of the Out of the Box Theatrics production of Baby. For those who are not familiar with this early 1980’s musical (i.e. everybody who isn’t a total theatre geek), it was a nominee for a Best Musical Tony in 1984. The book, by Sybille Pearson, tells the story of three couples who are dealing with pregnancy, and is accompanied by music by David Shire and lyrics by Richard Maltby, Jr. This version (which included input from that creative team) was updated. So, for example, the college student couple both have disabilities - Danny is deaf and Lizzie is legally blind, choices which were apparently made because of the actual disabilities of the actors in those roles. More significantly, Nick became Nicki, who, with Pam, make up a same-sex couple rather than a couple facing infertility. I didn’t notice any particular changes involving Arlene and Alan, who are an older couple unsure if they want to have an unexpected child after having raised three children already. There were also updates to song lyrics, particularly notable in “I Want It All.” Overall, it is an entertaining and funny show, which works nicely in an intimate space. It made for an enjoyable end to a long day.

My first activity on Saturday was seeing The Polonsky Exhibit of Treasures at the New York Public Library. This is free, but requires timed tickets in advance. The objects exhibited are divided into several display cases addressing topics like performance, explorations, belief, childhood, etc. There is an incredible range of objects, from Thomas Jefferson’s handwritten copy of The Declaration of Independence to theatrical posters, from a Gutenberg Bible to Virginia Woolf's walking stick. For example, here are Winnie-the-Pooh and friends: 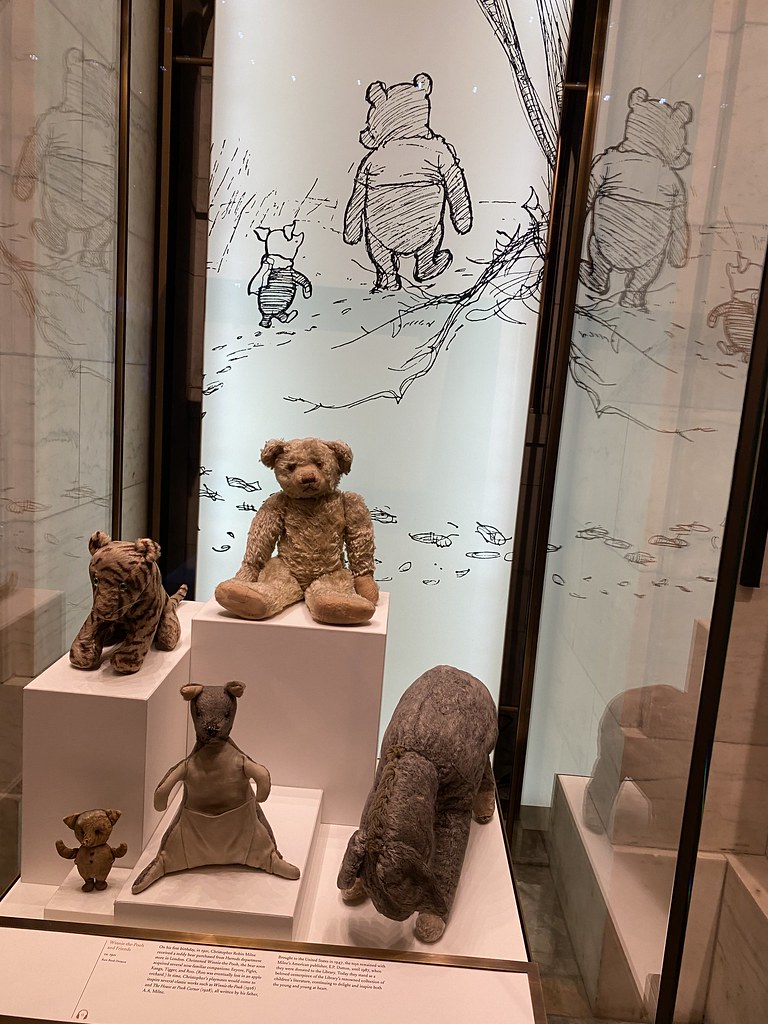 and here is a Ketubah (a Jewish marriage contract): 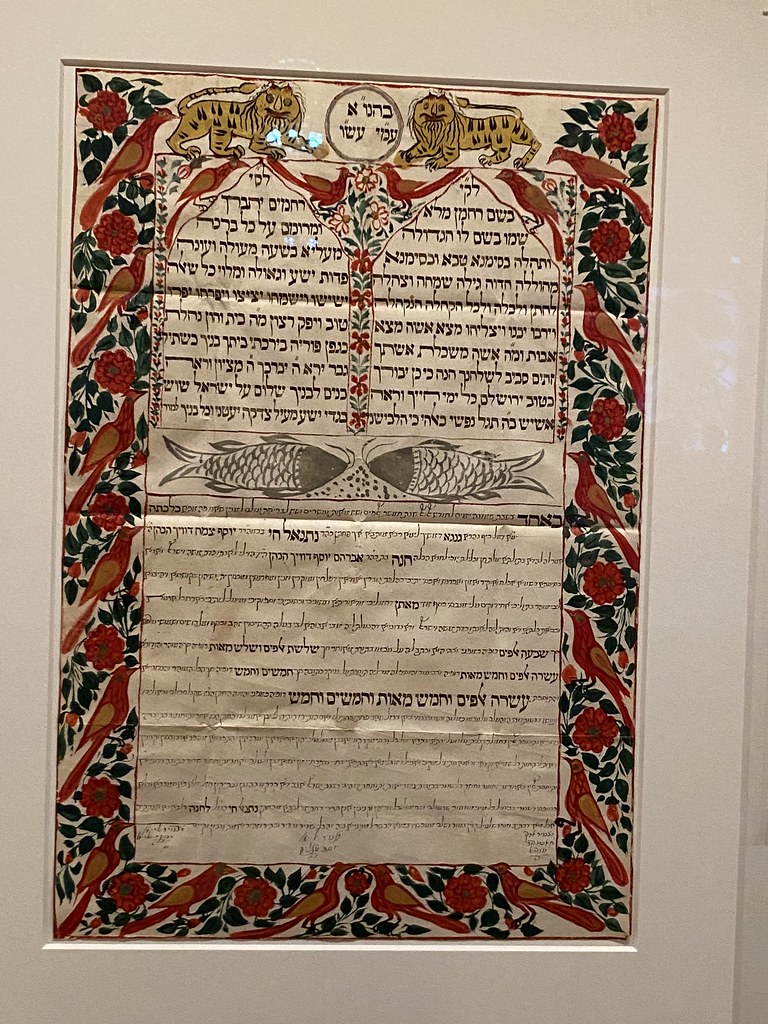 The number of objects is overwhelming in many ways and it was easy to spend about two and a half hours there. It was a bit more crowded than was optimal and it was sometimes difficult to read the descriptions of objects. I should also mention that I particularly enjoyed the audio and moving image clips, which ranged from ballet to Broadway to jazz and took about 35 minutes to see all of.

After I left, I headed uptown to meet another friend at Lexington Candy Shop, which (despite the name) is really an old-fashioned luncheonette. We sat outside, where he had soup and I drank some hot cocoa. We were in that neighborhood because I had gotten us tickets to the New York Adventure Club tour of the New York Society Library. I am on their mailing list because I’ve done a number of their virtual tours, but this is the first time I did one of their in-person events. The New York Society Library is a membership library and was the first library in New York City. They do have several rooms that are open to the public and put on public events, but only members can access some of the building (which was a private mansion) and borrow books. The tour took us behind the scenes, including the some of the stacks, some quiet reading rooms, and (most interesting) the conservation lab. It was definitely a good use of an hour, especially for some of the stories involved. For example, Herman Melville borrowed all of their books on whaling, kept them for a year and a half, and scribbled in all of them.

My Saturday evening plans were to see The Visitor, a musical adaptation of one of my favorite movies. Alas, the best laid plans of mice and Miriam … I got an email and phone call and a text from the theatre that the show was cancelled that night due to a personal emergency on the part of a member of the team. (My assumption is that someone got COVID, but I was not able to confirm that). I was booked up enough during my limited time that I couldn’t reschedule, so opted to request a refund. Instead, I had dinner at B&H Dairy Restaurant, which is a classic Jewish establishment that has been around forever. I don’t think I had been there in decades. Their mushroom barley soup is, alas, not as good as my own, largely because they put too much dill in it. And their pirogies were a bit bland. Still, it’s an institution and provides cheap, mostly vegetarian food. (They do serve fish, too.) Then I walked up to the Strand, a bookstore that provides excellent browsing Later on, I met up with another friend (who was also visiting from D.C.) to get pie at Petee’s. Unfortunately, they had closed their seating area due to the pandemic. So we took out slices of pie (coconut custard in my case, because they didn’t have nesselrode, which they are the last bastion of in the known universe) and went to Starbucks to chat for about an hour. The pie made a nice bedtime snack at any rate and, even with the time change, it was nice to have an earlyish night.

This entry was originally posted at https://fauxklore.dreamwidth.org/498820.html. Please comment there using OpenID.
Collapse