I keep meaning to post here and not getting around to it. Here’s an update.


Celebrity Death Watch: Carola Eisenberg died in March at the age of 103. She was the Dean of Students at MIT during at least part of my undergraduate days and was the first woman to hold that position. Adlai Stevenson III was a senator from Illinois through the 1970’s. Edward Barnes co-created Blue Peter. Neddy Smith was an Australian criminal, who I’d had on my ghoul pool list a couple of years ago but given up on. Art Metrano was an actor who appeared in the Police Academy movies. Audrey Haine was a pitcher and Joan Berger was an infielder in the All-American Girls Professional Baseball League. Abigail Guzman was the founder of the Shining Path terrorist group in Peru. Don Collier was an actor in television westerns. Ida Nudel was an activist who was instrumental in freeing Soviet Jews. Norm MacDonald was an actor and comedian. Reuben Klamer invented board games, including The Game of Life. George Ferencz was a theatre director. Penny Harrington was the first woman to head a major police department in the U.S. (in Portland, Oregon). Clive Sinclair was pioneer in electronics, including personal computers. Jane Powell acted in a lot of MGM musicals. Ronald Probstein was a professor of mechanical engineering at MIT, who did a lot of research on hydrodynamics and spacecraft reentry. Sarah Dash sang as part of Labelle. Melvin Van Peeble was a filmmaker, actor, and director. Peter Palmer played Li’l Abner on Broadway. Al Harrington was an actor, best known for appearing in Hawaii Five-O. Willie Garson was an actor known for appearing in Sex and the City. Jay Sandwich was a television director who won four Emmys. Roger Michell was a film director, whose work included Notting Hill. Pee Wee Ellis was a saxophonist. Bobby Zarem was a publicist for people ranging from Dustin Hoffman to Cher. Michael Tylo was a soap opera actor. Lonnie Smith was a jazz musician. George Frayne, better known as Commander Cody, was a pioneer ion alt-country music. Lars Vilks was a sculptor who founded his own micro country, Ladonia, due to a property dispute over the location of some of his work.

Willard Scott was best known as a TV weatherman. He had also been the creator of Ronald McDonald, but the company decided they wanted to use a thinner man as their mascot.

Harold Franklin was the first black student at Auburn University. The university removed everyone else from a wing of his dorm to prevent contact with him and refused to grant him his degree by creating various pretexts to refuse to accept his thesis. It took until 2001 before they acknowledged his having been their first black student, even though he enrolled in 1964. They finally granted his master’s degree in 2020 after he had retired from an academic career at other universities.

Anthony Hewish was a radio astronomer who won a Nobel prize. He is widely reviled for having appropriated the work of his graduate student, Jocelyn Bell, who discovered pulsars.

Rabbi Moshe Tendler was an expert on Jewish medical ethics. His writings on the subject of organ transplantation (which include discussion of the concept of brain death) have been very influential in the Orthodox Jewish world.

Tommy Kirk was a child actor in Disney films, including Old Yeller and The Shaggy Dog. His later career was, alas, destroyed by drug addiction.


Health Update: I think my rib is as close to fully healed as I’m going to be able to tell. However, I wrenched my left wrist painfully last week. How? I was just trying to open a a plastic bottle of Coke Zero. See, I knew soda was bad for me. (I eventually had to resort to using pliers.)

Rosh Hashanah Leftover: I forgot to mention that I had seen a video (about cooking fish) that mentioned five traditional foods for Rosh Hashanah. These are apparently based on having Aramaic names which sound similar to words in accompanying blessings. These are zucchini, black-eyed peas, leeks, Swiss chard, and dates. I wonder if this is the source of the Southern U.S. tradition of eating black-eyed peas for the (secular) new year. Also, Ashkenazim (i.e. Eastern European Jews) added carrots to the list, presumably because of availability.Of course, a better known tradition is to eat the head of a fish or a sheep. If you’re a vegetarian, you can just have a head of lettuce!


National Book Festival: The National Book Festival was the last week or so of September and was mostly virtual. I watched two presentations. One, on book construction (i.e. book structures and bookbinding) was mediocre, but might be of more interest to people less familiar with the topic. The other was about crossword puzzles and featured Will Shortz (of course) and Adrianne Raphel. They were entertaining and there was some fun crossword trivia included. I need to find time to go back and see what other presentations I want to watch.

Aptonym: The founder of Epik, the web host of choice for neoNazis and other right-wing lunatics is named Rob Monster. And that is, apparently, his real name.

Korean Food: I went out to dinner a few nights ago with a friend who I hadn’t seen in a while. We went to ChiMC, which is a Korean place near where I live, chosen for interestingness, outdoor seating, and easy parking. She got their signature fried chicken, but I am not so keen on fried chicken, so I opted for something called tteobokki, which consists of fish cakes and cylindrical rice cakes, in a spicy sauce. It was pretty good, assuming you like spicy food, but the texture of the rice cakes was a bit weird.


Mock Jury: I spent a day in a hotel conference room being a mock juror. I can’t write about any of the details, but it was interesting and I walked away with $200. I’d do it again. I’ve filled out an info form with another company that does what sound like similar focus groups. (And I felt like Susan Dennis who seems to do lots of focus groups.)


Speaking of Finding Time: The National Storytelling Festival is going on right now. But I have two things I need to finish by October 5th, so I won’t be watching any of it until at least Wednesday. Plus, of course, baseball is another distraction, what with my Red Sox facing the Source of All Evil in the Universe in the Wild Card playoff on Tuesday. I went to Saturday’s game at Nats Park, by the way, which was exciting, but in a way that I am sure was not good for my blood pressure. Fortunately, the BoSox pulled it out, but the eighth inning was decidedly scary. And why did Alex Cora leave Austin Davis in for the ninth? Admittedly, that led to the rare sight of a pitcher being deliberately walked (and then advancing to second base, a place he probably hadn’t seen since high school) but he raised the stress level in the bottom of the ninth by giving up a two run homer.

A Follow-up re: the Flushies: You can hear me interviewed on the You’re Invited podcast. The little segment where Mike talked with me starts just about 07:34, but if you listen to whole show, you can get an idea of what my social life is like. And, as a bonus, this is a photo of the shirt I was wearing (which is part of what we talked about): 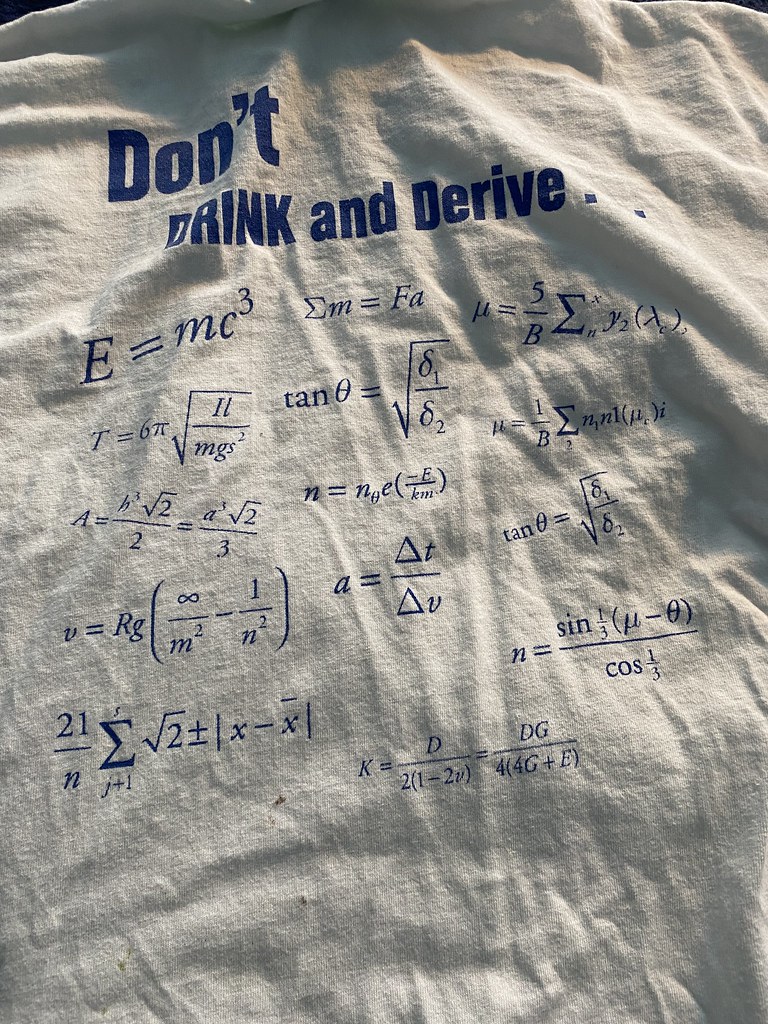 I will fully admit I don’t know what all of the equations are supposed to be. And I especially don’t know why one of them is repeated on the shirt.

This entry was originally posted at https://fauxklore.dreamwidth.org/496950.html. Please comment there using OpenID.
Collapse