First of all, I am recovering reasonably well from my broken rib. For the most part, it doesn’t feel much worse than a bad backache at this point and is manageable with decreasing amounts of tylenol Now for the catch-up on other things (including the trip that led to the trip…)


Celebrity Death Watch:Paulette Goodman was the president of PFLAG. Lucille Times was a civil rights activist. Sean Lock was a comedian. Douglas Ankrah invented the porn-star martini. Gary “Chicken” Hirsh played drums for Country Joe and the Fish. Kara Upson was an artist, best known for The Larry Project. Jill Murphy wrote The Worst Witch. B. Wayne Hughes founded Public Storage. Chuck Close was a photorealist painter. Sonny Chiba was an actor and martial artist, best known for appearing in Kill Bill: Volume 1. Jeanne Robertson was a humorist and motivational speaker. Don Everly was the older of the Everly Brothers and wrote some of their songs, including “Cathy’s Clown.” Michael Nader was a soap opera actor. Jimmy Hayes was a hockey player. Jerry Harkness was a basketball player. Ron Bushy played drums for Iron Butterfly. Charlie Watts played drums for the Rolling Stones. Mal Z. Lawrence was a borscht belt comic.


Gilbert Seltzer continued working as an architect until at least the age of 105. (He was 106 when he died in August). He designed a number of buildings on college campuses. He was also the last surviving member of the Ghost Army,, which decoyed German troops away from World War II invasion beaches. He earned me 18 ghoul pool points.

Tom T. Hall was a singer-songwriter. “Harper Valley PTA,” which became a hit for Jeannie C. Riley, was one of his more famous songs. He also wrote a number of short stories.


Micki Grant was the first woman to write music, book, and lyrics for a Broadway musical (Don’t Bother Me, I Can’t Cope), as well as writing and acting in a number of other shows.

Maki Kaji popularized sudoku and may have given it that name. He did not, however, invent it. Dell Puzzle Magazines had been publishing it as “Number Place” since the 1970’s and the puzzle form really dates back to Euler.


Carolyn Shoemaker was an astronomer, best known for co0discovering Comet Shoemaker-Levy. She apparently set some sort of record for discovering comets and asteroids.


Lee “Scratch” Perry was a reggae musician, songwriter, and producer. That grossly understates his influence on the genre, as he worked with a wide range of other musicians and pioneered studio techniques for reggae, dub, rocksteady, etc.


I assume you don’t need me to tell you about Ed Asner. He was the first actor to win Emmy awards for both comedy and drama for the same role (as Lou Grant, of course). He appeared in a large number of movies, television shows, and plays, and was the president of the Screen Actors Guild in the early 1980’s. He was also a political activist, with notable involvement in opposition to U.S. policy in Central America in the 1980’s.

Don’t Analyze This Dream: I was at some sort of museum with my brother. The museum was in two sections, the first of which was a zoo, which we finished going through fairly quickly. There was a long tunnel-like hallway to the other section and he stayed back for some unknown reason. When I got to the other section, it turned out to be mission control for some space program involving French astronauts. The spacecraft was under attack and when it was hit, a dying female astronaut landed on the floor of the room I was in.


Ink!: I got ink in the Washington Post Style Invitational Week 1446. The contest involved a crossword grid in which certain letters were covered with lentils, which you could replace with any letter you chose. My entry, which won an honorable mention, was “Pants-0n Fine: What the Norwegian beach handball team has to pay for not wearing bikini bottoms.”


The Best of 1960’s Cookery: I am looking through various cookbooks I have in my house, some of them from my mother. In one, which is a community cookbook from a synagogue in Connecticut, there are some real 1960’s classics. Think tomato aspic and such. Anyway, there is one recipe for “tropical chicken” which calls for chicken breasts to be marinated in a mixture of bottled Russian dressing, jarred strained bananas (i,.e. baby food), lemon juice, onion, ginger, salt, and pepper, before being grilled. I hate bananas to begin with, but this just sounds horrific. Another recipe in the same book calls for blending peaches, but notes that if you don’t have a blender, you can just use jars of peach baby food!

Before the Fall: I went to Chicago primarily to go to a couple of FlyerTalk Dos - meals with other people who are passionate about travel, airline pointss and miles, and such. I’ve been to Chicago numerous times, so was looking for things to do that I hadn’t done before. One of my minor obsessions is national parks and I noticed that it is possible to get to Indiana Dunes National Park from Chicago by train. This worked pretty well - you take the South Shore Line and get off at Dune Park. It was slightly confusing to find the trail to the visitor center, because you have to walk north a bit to get to the southbound trail, but I figured things ou and found my way. The walk is roughly a mile and a half and is easy (paved) and pleasant. The visitor center shows a film about the park, which incorporates a state park and various other attractions and is, apparently, a good place for birding at some times of year. There are various other exhibits at the visitor center, but they weren’t memorable. All in all, it’s not up to, say, Acadia or Zion, but the National Park Service always does a good job and it was good to be able to stamp another national park in my passport book.. 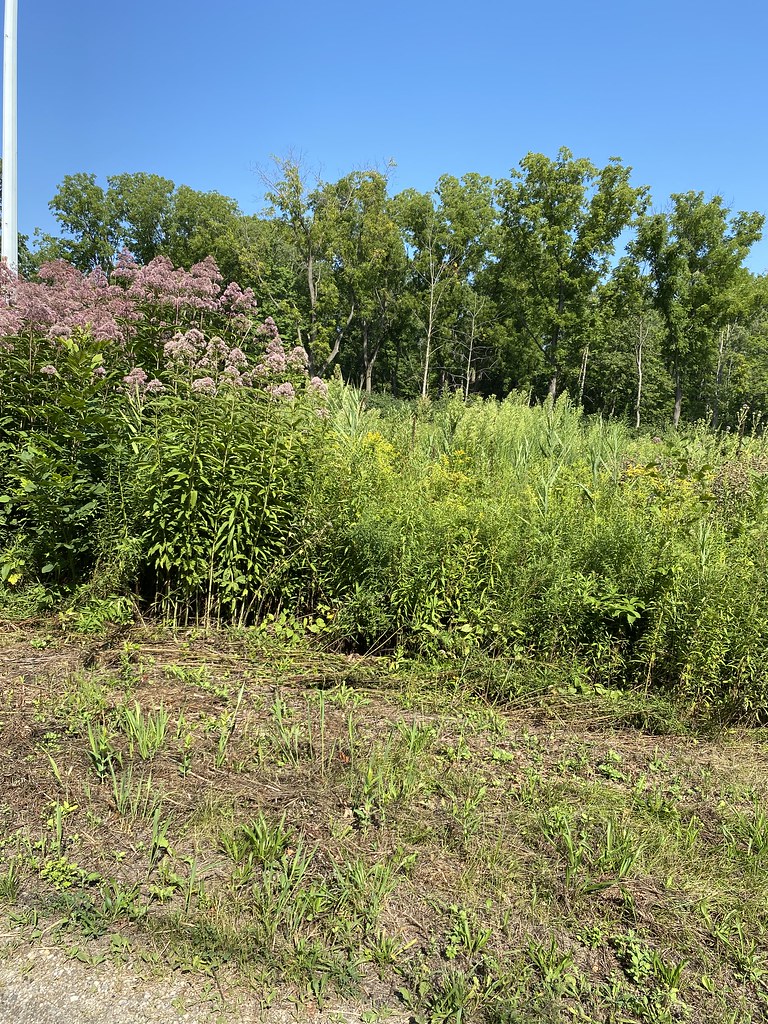 On Friday, I met up with a couple of FlyerTalkers to go to a game at Wrigley Field. I noticed that The Bagel Restaurant and Deli, one of the more highly reviewed Jewish delis in Chicago, is not far from the ballpark, so had lunch there (a tongue sandwich on an onion roll and potato salad). It was delicious, but there weren’t any sour pickles. It was a pleasant walk of maybe a mile to the ballpark. Our seat were on the third base line but shaded, the weather was nice, and I didn’t care who won the game, so it was a good ballpark experience. (My previous experience at Wrigley involved a seat with rather obstructed views, so this made up for it). The Cubs lost to the Royals, who I have something of a soft spot for because a guy from my home town used to pitch for them ages ago. 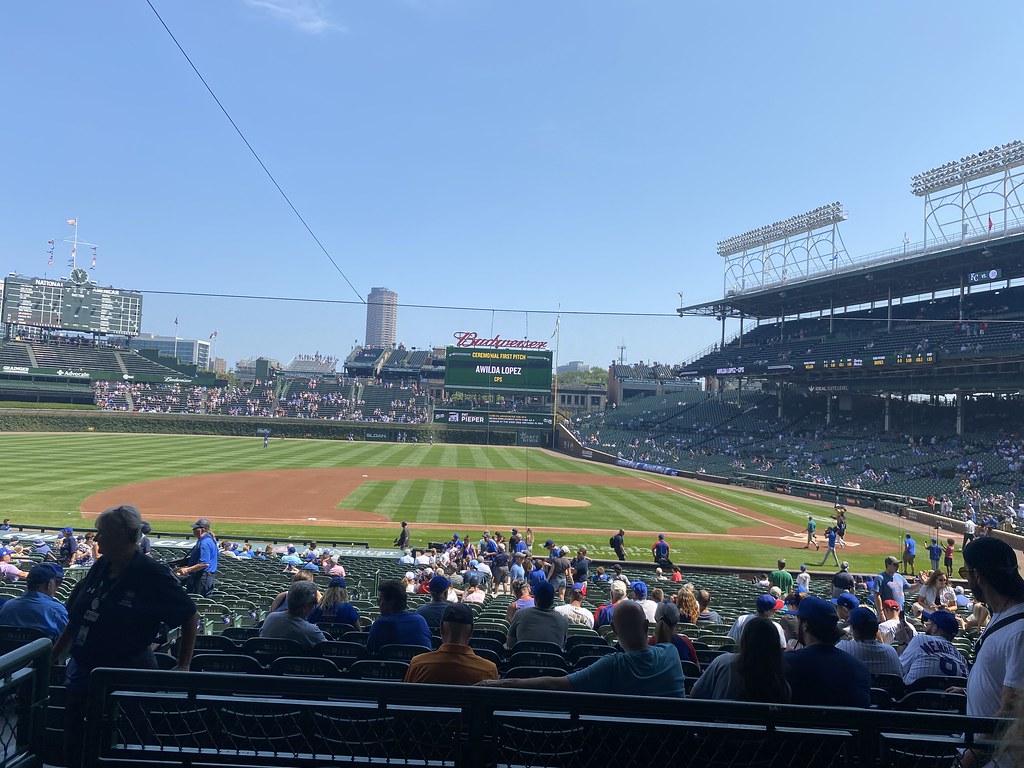 After the game, we walked up to Irving Park Road and took a bus west to meet up with more FlyerTalkers for dinner at D’Candela an excellent Peruvian restaurant. There were pisco sours, of course, but the main feature was roast chicken. There were also empanadas, ceviche, chaufa (fried rice), potatoes in a yellow sauce, plantains, and probably other stuff I’ve forgotten about. The food was delicious and the conversation was lively, so it was a pleasant evening.


The next day was Saturday and I started the day with a new and unusual tour. I’ve done both a walking tour and a river tour of Chicago architecture in the past - but this was the Ugly Buildings Tour. I would suggest you do the normal tours first, but this made an interesting contrast. Some of the buildings in question are parking garages, which I admit to having low expectations of. Some did not strike me as particularly ugly. But there are others which are fortress like and uninviting. Overall, I’d say the tour was educational, as well as amusing and was a good use of a couple of hours.


I spent the afternoon going to the Shedd Aquarium. It’s a reasonably good aquarium, but I was a bit tired and it was more crowded than was optimal, so I didn’t enjoy it as much as I expected to. Also, they have weedy sea dragons, but not leafy sea dragons, which is always disappointing. (The latter are my favorite aquarium critters, by far. My least favorite aquarium critters are juvenile homo sapiens, of course.) There was also confusion about the bus back downtown, which was not running from the stop right in front of the aquarium due to a football game. Some sign to indicate that would have been helpful. (There is another stop quite nearby, by the Field Museum, so this was mostly an information problem.)

Sunday started with the other FlyerTalk event - breakfast at Uncle Mike’s a Phillipino restaurant. I had their Manila omelet, which was tasty. This was a smaller group than Friday night had been, but the conversation was just as lively. After that, I walked up to an “attraction,” a friend had suggested. The Shit Fountain was designed to remind people to clean up after their dogs. I’m not sure it was worth the detour (a little under a mile), but it is was something I hadn’t seen before.
When I was going back to my hotel, I noticed that the Chagall mosaic, The Four Seasons, was only a few blocks further, so stayed on the El and went to see that, which was considerably more worthwhile. 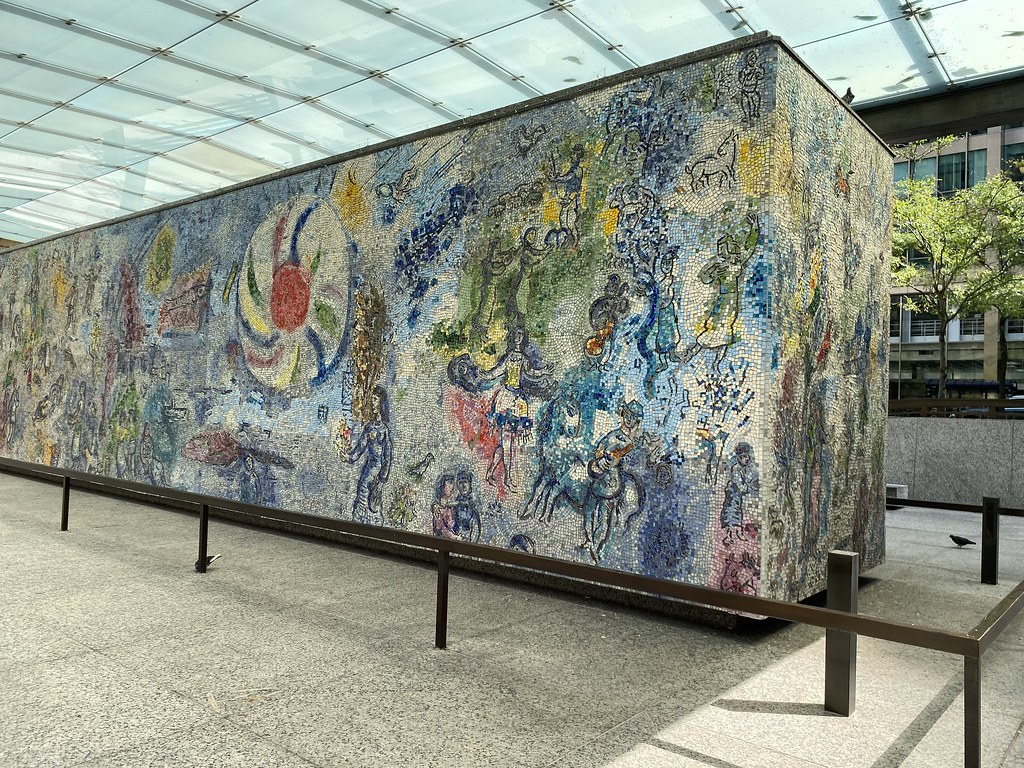 After that, I checked out a street festival nearby, then went to my hotel room and rested for a while. I had bought a ticket to a storytelling show in the evening and noticed that the venue was fairly close to another thing I was interested in - Oz Park, which has Wizard of Oz related statues. It was a pleasant walk around the park to see those. 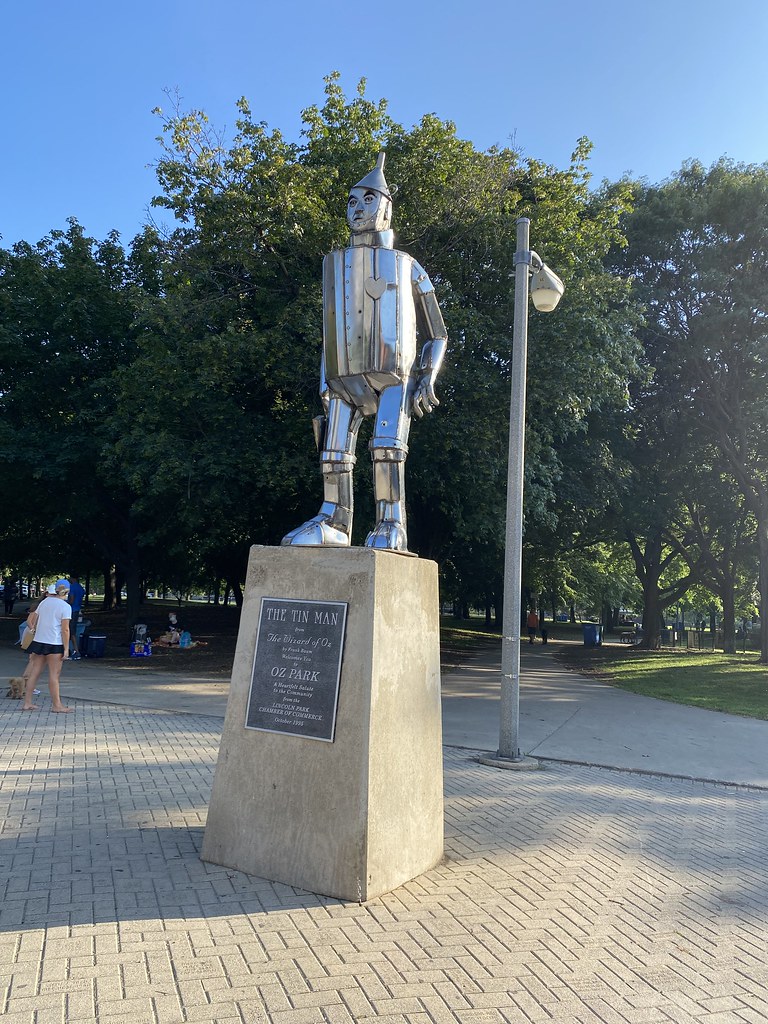 It was on the way from Oz Park to the nightclub where the storytelling show was that I fell on an uneven bit of sidewalk. I didn't realize how injured I was, so I went to thee storytelling show, took the El back to my hotel, and tried to sleep. I was in enough pain by the morning that I cancelled the rest of my trip and came home.


What I had intended to do was see two more things in Chicago (the Banksy Exhibit and the American Writers’ Museum) and then take the train to New Orleans to go to the Museum of Southern Jewish Heritage and maybe the Audubon Zoo if the weather cooperated. Oh, well, some other time.

This entry was originally posted at https://fauxklore.dreamwidth.org/495760.html. Please comment there using OpenID.
Collapse