The theme for week 40 (October 1-7) is Ten. This is, obviously, a theme that could be interpreted a lot of ways. Of the suggestions I read, the one I decided to go with is to write about the person designated at 10 in the Ahnentafel genealogical numbering system, which is one of several standard approaches to organizing an ascending chart of ancestors. You can google the details if you like, but the relevant part is that this particular number refers to one’s paternal grandmother’s father. In my case, that would be Shachne FAINSTEIN. Here’s a copy of his internal passport card from 1920. 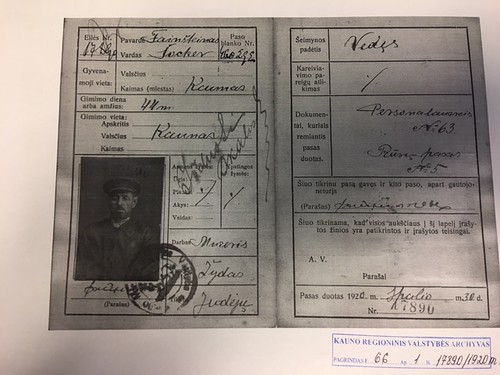 Shachne is actually a nickname, an affectionate diminutive for Shokher, which is the Yiddish form of the name Issachar. I mention that because searching for records requires using "Shokher" – even allowing for phonetic searches wouldn’t find him as Shachne. It is, in general, useful to understand nickname patterns. As another example, Shachne FAINSTEIN’s brother was called Itsko, which is a nickname for Yitzchak (Isaac).

Anyway, Shachne FAINSTEIN was born in Josvainiai, Lithuania somewhere between 1876 and 1882, depending on which records you believe. His parents where Shimkha FAINSTEIN and Esther Malka, nee SALOMON. He had two siblings – Itsko (who I just mentioned) and Rachel, who married a man named David VIATRAK.

He moved to Kaunas somewhere before 1906, when he married Khaia Tsipa, nee KHONKEL.Their children were Dvoira Etel (my grandmother, born 14 February 1907), David Mishel (born 5 August 1910), Nachum (born 1916 in Slutsk, now Belarus), Sora Beila (born in 1912 or 1918), and Noson Wulf (known as Velvel, who was possibly born in 1923). There is some confusion because there is also a death record for a daughter named Michle, who died 25 September 1930 at the age of 18. I had been assuming that was a mistake for David Mishel, but there are some documents in the internal passport files which indicate that there was a daughter, Michle, and say nothing about a son named David. (The birth record is definitely for a son, as it has information on his bris.)

A 1941 voter’s list gives his address as Jonavos 48. That street has been torn down and everything replaced, so I was not able to see that building when I was in Kaunas in August. According to my father, he also had a summer house across the river in Slobodka (now Villiampole). He was a brick contractor. Apparently, he started out as a builder / bricklayer and then went into the contracting side of the construction business. I saw a lot of red brick buildings during my trip, so I guess it was a good business.

He was killed on 28 October 1941. The only one of his children who survived was Nachum, who settled in Israel after the war.

This entry was originally posted at https://fauxklore.dreamwidth.org/428431.html. Please comment there using OpenID.
Collapse