It’s time to do some of the catching up. Let’s start with a trip to New York in August, just before I went on my real vacation.

Lollapuzzoola 11: I’ve said before that Lollapuzzola is my favorite crossword tournament. It’s smaller than the ACPT and less pop-culture heavy than the Indie 500. Historically, the puzzles have been just a little bit wilder in their themes, although I thought that this year’s were actually pretty much on the normal side. Even without cell phones going off or people imitating cats, I still had a good time.

The travel was mildly stressful, as there was some sort of Yellow Line delay and I got to Union Station just as my train to New York was boarding. Still, the train is definitely the best way to make the DC to NYC trip and it’s not like I actually missed it. I stayed at the Renaissance on West 35th Street, which is convenient to Penn Station and proved to be quieter than most of the other New York hotels I’ve tried. (My favorite is still the Library Hotel, but it is hard to get a good rate there, so it’s splurgy. I also love the Algonquin, which is a good use of Marriott points.)

They’d moved locations this year to Riverside Church, which is across the street from Grant’s Tomb, aka one of the New York City tourist attractions I have never actually gone to. It’s up near Columbia University and it had been over 40 years since I’d been over that way. It’s changed less than one might expect, though there are more chain restaurants on Broadway than there were back in the mid-1970’s when I went to a Saturday science program for high school students at Columbia.

Puzzle 1 was by Aimee Lucido. The theme was easy to figure out, though I think someone could have solved the puzzle without really grasping it. I solved it cleanly in 12:16. That’s slower than the top solvers, but still reasonably respectable.

Puzzle 2 by Erik Agard and Yacob Yonas didn’t go quite as well for me. I didn’t completely grasp the theme. The "aha" moment struck about 5 minutes after I turned the puzzle in. That wouldn’t have made much of a difference – but there was a crossing clue I didn’t know the answer to. Had I completely understood what was going on (or, at least, read the theme clue a bit more carefully), I wouldn’t have had an error. I had a decent time (11:59) and, frankly, I doubt that taking another minute or two would actually have helped. So much for the goal of solving cleanly.

Puzzle 3 by Patti Varol went better. I enjoyed the theme (which I understood) and solved it cleanly in 13:05. I think the lunch break followed that, during which I went with several people over to Sweet Green, a salad chain that has good food but annoys me on the grounds that they don’t take cash. My willingness to go with the group is based on my usual prioritization of sociability over at least some of my persnicketiness.

I didn’t think that Jeff Chen’s Puzzle 4 was particularly interesting, though I solved it cleanly. It took me 23:39, which was also reasonable.

Puzzle 5, by Paolo Pasco, had the sort of theme that I always enjoy (and which I figured out reasonably easily). I solved it cleanly in 23:59, which, while respectable, was a tad slower than I should have been.

I ended up finishing 112th out of 253. That’s the 55.7th percentile. (If someone happened to see what I said on facebook, I only just now realized how to look only at the individual competitors and not include the pair solvers.)

To keep up the history, that isn’t quite my best showing at Lollapuzzoola, but it’s decent. I would, however, have preferred to have solved cleanly, instead of having that error in puzzle 2.

I had the traditional pizza for dinner. And then I took the subway back downtown for my equally traditional theatre-going.


SpongeBob SquarePants: I had chosen to see SpongeBob SquarePants: The Broadway Musical on the grounds that: 1) it had gotten pretty good reviews and 2) it was closing in September. The plot involves the town of Bikini Bottom in a crisis, involving a volcano that is about to erupt. SpongeBob enlists the aid of a squirrel scientist named Sandy Cheeks and his best friend, Patrick (a sea star) to save the day.

The story is fairly idiotic, but I do like that things are saved via science – and by a female scientist at that. The score consisted of a series of singles by a number of pop artists and was fairly forgettable. As for the performances, Ethan Slater was good in the title role, but I thought that Gavin Lee as Squidward really stole the show. Overall, this is really geared towards families with young children and would probably appeal more to people who love, say, The Lion King, which I also described as a show where I walked out humming the costumes.

I took a relatively early train home. I still had time to walk up West 35th Street and photograph the plaque which marks Nero Wolfe’s home, though there is no longer a brownstone there. 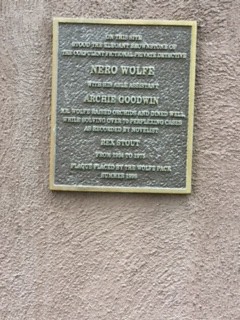 This entry was originally posted at https://fauxklore.dreamwidth.org/427100.html. Please comment there using OpenID.
Collapse