Last weekend, I went to Pittsburgh (aka YinzBurgh, after the local form of the second person plural) for the weekend to go to (part of) LoserFest, a gathering of Losers, i.e. Style Invitational devotees and hanges-on. I’m too busy at work right now to have taken time off, so I flew up in time to make it to Friday night dinner and subsequent events.

That Friday night dinner was at Vue 412, which we got to by riding the Duquesne Incline. I am not exactly sure what makes this an incline (i.e. an inclined-plane cable car railroad, versus a funicular. At any rate, it provided a good view, as well as being a somewhat obligatory tourist experience.

As for the restaurant, the view and the food were both excellent. The service was a bit iffier, with the waiter having to double check with me on my drink order since he couldn’t read his own handwriting. They were kind enough to agree to separate checks, but it took them a long time to sort them out. I am sure this is less of an issue with smaller groups on quieter nights.

We returned to the hotel and spent some time playing Cards Against Humanity before calling it a night. I understand why my normal games group won’t play this. But the Losers are a rowdy and shameless bunch, so it worked.

The first activity of the morning was glass blowing at Gallery G Glass. Gary Guydosh and his wife, Erica, led each of us through making an object of our choice. I went for a paperweight, largely on the grounds that it would be the easiest thing to pack for the trip home. The actual process was fairly straightforward, mostly involving turning a glob of hot glass on the end of a rod and manipulating it with a few tools. I think everyone had fun and was pleased with their results. I know I was.

We went back to the hotel where I tried to nap a bit before we headed out to lunch at Tessaro’s in Bloomfield, an old Italian neighborhood. The food was pretty good and the service was both friendly and reasonably efficient. They have murals on the wall which depict people who work there and members of the owner’s family, which made for a fun atmosphere.

Next stop was the Nationality Rooms at the Cathedral of Learning. This is a landmark at the University of Pittsburgh and is certainly one of the most unusual university buildings I’ve seen. The Nationality Rooms represent various communities with significant populations living in Pittsburgh and are paid for and designed by those ethnic communities. We took a guided tour, which let us see several (but nowhere near all) of them. As I have said before, I am a big fan of docent tours and this was another good example. Wandering around on my own, I would not have even realized that most of the rooms are used as working classrooms. There are also rooms you can’t enter unless you are on a guided tour. For example, the Early American room has a hidden staircase to an upstairs room, used for hiding suspected witches. Some of the other rooms we visited were the Ukrainian, Turkish, Israel Heritage, African Heritage, Indian, and Austrian.

Then we went on a duck boat tour. Because of the heat and sun, I chose to sit on the inside part, which may have been a mistake since the roof covering limited the views. (Yes, this was a canvasback duck. I will spare you more fowl puns, though our guide did not.) Anyway, the whole thing was about what I expected – some famous buildings and statues, followed by a short cruise in the Allegheny River. A few people got to drive the duck boat, including the LoserFest Pope (i.e. organizer), Kyle. Overall, I thought this was not a great tour, but one has to do certain touristy things.

We went back to the hotel for a little while, mostly to freshen up and change clothes. The Saturday evening activities started with Second City’s comedy show, Free Speech: While Supplies Last. There were some funny bits, e.g. a black man being told he couldn’t drink from a certain fountain. When he objected, "what is this? The 1960’s" the answer was, "no, this is Flint, Michigan." Another notable bit had to do with the fact that tampons are taxed in most states while, say, Viagra is not. But, overall, I wished the show was more focused and I thought several of the sketches were somewhat longer than they needed to be.

From there, we walked over to Ten Penny for dinner. We had a private room and, fortunately, it had a door that closed, as the main restaurant was extremely loud. I had the last hoppy IPA I’ve experienced in my life. Worse was the pecan crusted mahi, which was overcooked and dry, though the peach amaretto butter that topped it was interesting. The wheatberry salad that came with it was okay, but nothing special. The service was just okay, too, but it is probably just my tetchiness about waiters auctioning off the dishes that was behind that opinion.

We walked back to the hotel, where we played Cards Against Humanity again. I had some rather good luck with what cards I got, so ended up scoring lots of awesome points.

The only official Sunday activity was brunch. Well, really more of a breakfast, since it was 9:30. Kyle distributed our glass from the previous day. Here is mine: 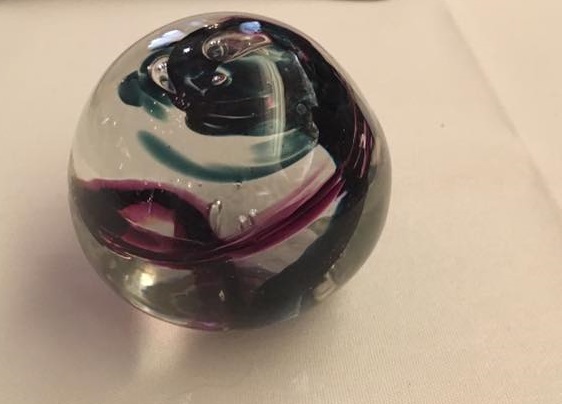 There was a generous buffet, meaning that I pretty much didn’t need to eat for the rest of the day. (I did eat some yogurt when I got home). There was also plenty of entertaining conversation.

All, in all, it was a good weekend excursion and I would certainly consider going to another LoserFest, assuming it worked with my schedule.
Collapse