Two quick notes before getting into the main subject: 1) Disco singer Donna Summer has died. 2) We get various alerts on our computer system at work. Most of them have to do with things like a fire alarm in some corridor or a ceremonial flyover at Arlington National Cemetery. Yesterday, however, there was one that was new to me. We got an alert about a swarm of bees at one of the entrances. There was a follow-up an hour or so later reporting the arrival of a bee remediation team.

Anyway, I spent the last Saturday in April emceeing the main stage at the USA Science and Engineering Festival. Overall, it was mostly fun, but there were a few annoyances. One was a guy who showed up claiming to be one of the emcees who was really supposed to be at a different stage. That just meant some quick reshuffling. Another was that the sound system was set up in a way that limited the emcees to using the podium microphone, rather than handhelds which would have let us go out into the audience. One big problem was crowd control. There were huge crowds for the big name performers on the stage (e.g. The Mythbusters and Bill Nye, the Science Guy) and people filled the aisles and every inch of available space. Frankly, I believe this was a real safety problem. Another problem was keeping people on time. The Mythbusters arrived late, but finished close to on-time, since they were mostly doing a Q&A. Bill Nye, however, had a complicated set-up and tear down and ran about a half hour over his time. The person who followed him (Science Comedian Brian Malow) very graciously cut his presentation down to about 10 minutes, but it really wasn’t fair to him. I understand that the big names draw people in, but there needs to be a better way to manage both them and the crowds that come to see them.

I should explain why the inability to use a handheld microphone was an issue. We had various things to give away – periodic table posters, candy, and a few t-shirts. The other emcee opted to use trivia questions for these. My brilliant inspiration (which worked very well) was to print out slips of paper with various child-suitable science jokes and have volunteers draw a slip from a bag to determine which joke I would tell. I then gave posters to all the volunteers. This would obviously have been easier if I could have gone out into the audience to do it, instead of having kids come up to the edge of the stage (which also meant I had to go back to the podium to read the joke they’d chosen).

Overall, I’d say the event was a success. The glitches didn’t seem to have a serious impact on anyone’s enjoyment of the event. 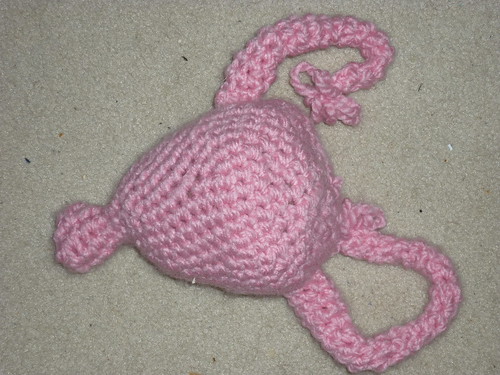 Amigurumi uterus. I crocheted this to give to a male politician who needs one of his own, so he won't feel obliged to try to control mine. The consensus of my knitting group is that Ken Cuccinelli (attorney general of Virginia) is the right person to receive this.

Working (A Musical) After the science festival, I walked over to Dupont Circle to see Keegan Theatre's production of Working (A Musical). I'll admit to some skepticism about how the Studs Terkel book would transfer to the stage. While I am not normally a big fan of either Stephen Schwartz or of revues (and this is sort of a revue, consisting of vignettes by a number of people, talking and singing about their jobs), I was charmed by the sincerity and strong character development. While none of the songs was particularly memorable, I found the score pleasant enough. I also want to note the choreography by Kurt Boehm, especially for the song "Millwork."

Knitting Group: Sunday afternoon was knitting group. I showed off the completed amigurumi uterus (see previous entry) and worked on Frankensweater. As usual, a good time was had by all.

Shopping: I needed to run over to REI after knitting group, because the rain jacket I bought in 1996 had finally breathed its last. They didn't have exactly the same one, but I found something acceptable enough. While I was over at Fairfax Corner, there was an art show going on and I bought a photograph of peppers for my kitchen. I also stopped in at Comfort One and bought a pair of cork shoes. All in all, that made a surprisingly productive shopping trip.

The Tannahill Weavers: Finally, I drove to darkest Maryland (okay, just Rockville) to see The Tannahill Weavers perform at St. Mark's. As always, they put on a good show. The entire audience was singing along (when appropriate) and tapping fingers or toes. It was a great example of the energizing power of music.
Collapse